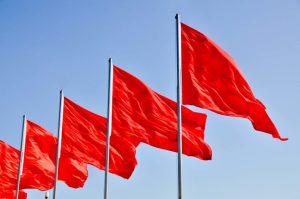 Having mulled over the review process in a previous blog, this week I take a tour through some classic linguistic features that are red flags when reviewing German to English translations.

Every language has its own formulaic features, expressions that often have no literal meaning but may be added for nuance or emphasis. A classic example of a redundant or semi-redundant German lexical item is “dabei” which implies “during this process” or “while doing”. The trouble is that most English formulations that capture this meaning sound awkward and the eagle-eyed reader will soon suspect a German source even if they were not aware they were reading a translation. In most cases, the best solution is simply to omit the phrase as the meaning is usually clear from the context.

Another classic red flag to the reviewer is the direct translation of a phrase that has no equivalent in the target language. German fashion and design texts love the phrase “echte Blickfänger”, literally “real eye-catchers”. If you use a translation tool like Linguee, which is based on genuine online translated texts, you will find lots of examples of this precise phrase “real eye-catchers”. But would anyone write this in English if they weren’t translating a German text? The answer is no, absolutely not. A better solution is to reword the relevant phrase to refer to a “striking design”, “eye-catching detail” etc.

Glossaries are particularly prone to this kind of mistake as the capacity for rephrasing is limited. I recently came across the term “alltagstauglich” translated into an English glossary as “everyday-suitable”. Hideous. The best solution will depend on the context and may be something like “suitable for everyday use” or simply “practical”.

It is not just vocabulary and phrasing that can be linguistic giveaways. German loves massive sentences and has a passion for the sub-clause. German readers are used to waiting for critical information while the author dives off into comma-delimited side thoughts and sub-sub-sub side thoughts. There is nothing wrong with chopping these monsters up into more manageable chunks in English. In fact, moving away from the original syntactic structure is often the only way to make a text readable.

Another area where the translator should not be afraid to plough their own path is punctuation. German tends to use a capital letter following a colon, which is also the preference in US English texts, while UK English generally prefers lower case after a colon. Bullet point lists also differ in punctuation between languages and indeed between publishing style guides. Your choice may depend on whether the list contains short incomplete sentences (no punctuation needed), or paragraphs of normal text requiring full stops, commas etc. Whatever you do, make your style decision and stick to it. Crucially, don’t feel obliged to stick resolutely to the punctuation choices in the source.

Finally, pay attention to little details. German is much more likely to include the definite article than English, so the first step when reviewing German to English translations is often to trawl through deleting excess “the” with gay abandon! But beware, sometimes you might need to do exactly the opposite and insert one. So, where German has “dienen als Grundlage” English prefers “serve as a basis” or “the basis”.

Finally, be careful to ensure idioms make sense in the relevant context. When Germans use the borrowed Italian term “in petto” (literally meaning “in the chest” and figuratively used to mean “in secret”), it is often in the phrase “etw. in petto haben”. In English this is often successfully translated with our equivalent idiom “to have something up your sleeve”. A translation I reviewed recently used this phrase with reference to a shoe design, prompting the question: can a shoe have something up its sleeve?