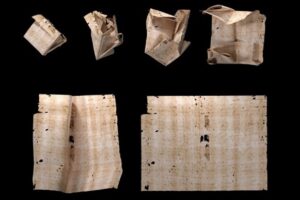 We are all familiar with references to cybersecurity and different forms of encryption to ensure digital information can be exchanged without being intercepted by a third party. But the desire for secure methods of communication has its roots many centuries before the first computer was even dreamed of. Letterlocking is a method of folding and securing a written message that prevents the letter being read without tampering with and breaking the seals created in the paper itself. Folding and cutting techniques are used to secure the paper letter, creating a series of creases and slits that are sometimes additionally secured with sealing wax. The process has been dated back to the 13th century and different individuals developed their own distinctive letterlocking techniques, which were often recognisable to the recipient. Charles I of England claimed he could identify a piece of correspondence from a particular close confidante, stating that he knew “by the fowldings” who it was from.

Protecting the confidentiality of written communications is not the only historic phenomenon that will be familiar to the modern audience. The postal system has always suffered from the problem of lost or misdirected items. And the largest collection of letterlocked artifacts is a postmaster’s trunk of undelivered letters sent from all over Europe to the Hague, the Netherlands in the late 17th and early 18th centuries. The Brienne Collection, as it is known, has provided researchers with a rare opportunity to study sealed locked letters. The archive contains over 3000 catalogued items, including 577 unopened letterpackets.

Traditionally, historians were dependent on physically cutting open sealed letters to inspect the contents, but a team at MIT have now successfully used computational modelling and scanning techniques to “virtually unfold” these items. This work built on earlier investigations into letterlocking that focused on scanning and modelling physically simpler artifacts, such as scrolls, books and items that had only been folded once or twice.

The first item the team successfully “unlocked” was a letter from Jacques Sennacques dated July 31, 1697 and sent to his cousin Pierre Le Pers, a French merchant in The Hague, requesting a certified copy of the death certificate of a third individual. The team acknowledge that the contents of the letter are less than thrilling, noting that it might not “radically change our understanding of 17th century history.” The excitement about this research is the possibilities it offers. There are all sorts of collections around the world containing unopened letters and documents. The MIT researchers mention, in particular, the Prize Papers collection, which is held by the UK National Archives and consists of items seized from around 30,000 ships between 1650 and 1815. Among these items are about 16,000 undelivered letters, many of them still sealed and unread. But maybe not for long.