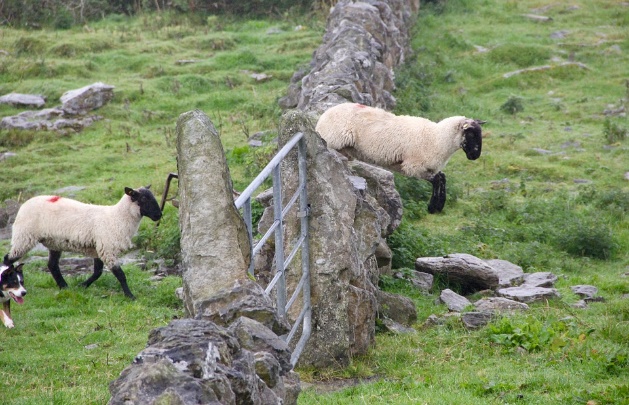 My recent transatlantic travels and associated jet-lag lead me to thoughts of the traditional cures for insomnia. All I can say is, if you rely on counting sheep to fall asleep, I don’t recommend switching to the traditional English language of sheep counting highlighted in a blog post which I stumbled across at the fabulous haggardhawks.com.The dialect numbers used by shepherds in the Lake District for checking on their flocks are far too entertaining to

The dialect numbers used by shepherds in the Lake District for checking on their flocks are far too entertaining to instil the boredom required for slumber:

Numbers used for counting sheep in the Lake District

This particular list comes from the 1898 dictionary of Lakeland Words but a paper on the subject by Mr. Alexander Ellis published in the Transactions of the Philological Society (in 1878, p. 316) suggests the existence of more than fifty such sets of numerals from many different parts of England from the north and Welsh borders to Surrey, Sussex, Essex and Lincolnshire. For instance, sheep in Derbyshire are numbered:

These traditional counting systems are still used among some shepherds today and echoes remain in the children’s rhyme Hickory Dickory Dock (based on the words for 8, 9, 10).

They were also used for counting knitting stitches, as described in the splendidly titled “Notes and Queries, a medium of inter-communication for literary men, general readers, etc.” from 1863. An entry on page 205 describes a knitting song recounted by an elderly parishioner in Wensleydale: 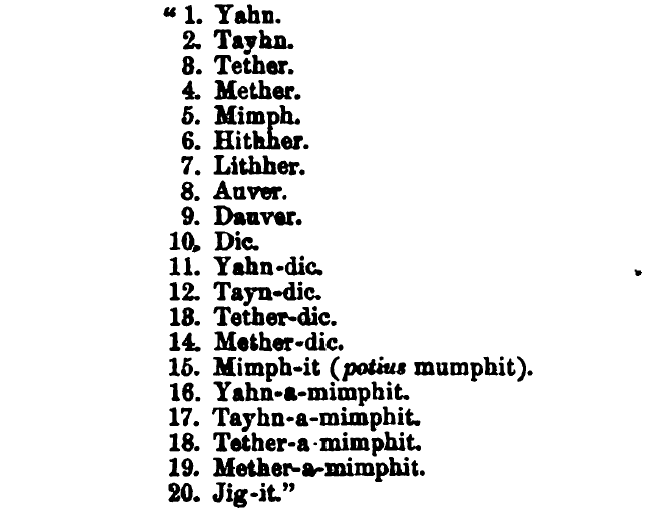 The Notes and Queries writer puzzles over the origin of this stitch counting system stating “Though it simply consists of numerals up to twenty, it is most curious; and seeing that it is evidently in the Norse language, must have lingered in the Dale a thousand years”.

In fact, according to Haggard Hawks, these counting systems have their roots in the Celtic languages which were spoken across the British Isles long before the Angles and Saxons turned up in England. The similarity to modern day Welsh is pretty clear: 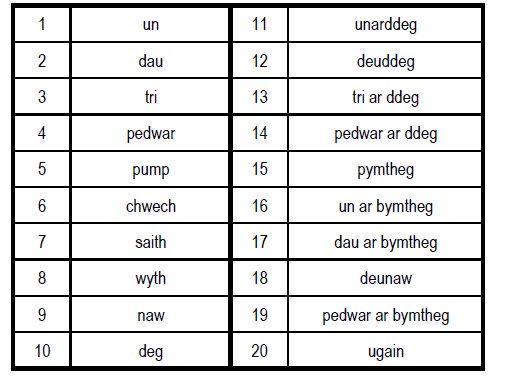 The traditional counting system used in Welsh is vigesimal, i.e based on twenties (rather than the more familiar decimal).Indeed the language of sheep counting usually stops at twenty, and if the shepherd reached this point and was lucky enough to have more sheep to count, he would put a pebble in his pocket or perhaps make a groove in his crook before starting from one again.

While the origins in ancient Celtic seem clear, it is also likely that the counting systems have been influenced by modern English as well as the surviving Celtic languages with some adaptations for rhyming purposes thrown in for good measure. Haggard Hawks describes them as “something of an etymological mixed bag”, and all the more charming and fascinating they are for this. Just don’t expect to drop off while pondering their origins or chuckling at the potential for rudeness when reciting them.