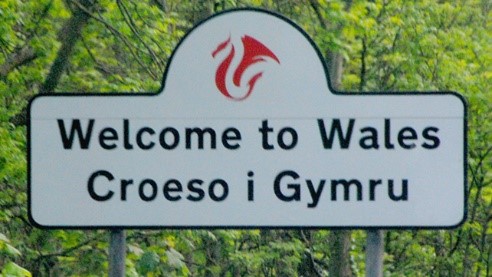 Each year as we drive into Wales to visit my parents I marvel at how the landscape genuinely transforms as soon as you cross the border. The moment you leave England the first lumps and bumps rise up in the land. Depending on your route into Wales these first hills might be the precursor to the dramatic mountains of Snowdonia in the north or the stunning Brecon Beacons in the south. At any rate, they mark a clear geographic divide between the country I grew up in and the one I’ve now lived in for almost three decades. The delight taken by the rest of my family in the appearance of the first Welsh hills is reassurance that I will be able to pass on my love of the Welsh landscape to my very English children.

The same, however, cannot be said of my ability to pass on any knowledge of the Welsh language. The border crossing is also marked by the first of many bilingual signs “Croeso i Gymru. Welcome to Wales”. At this point in the journey I often threaten to break into a chorus of the national anthem “Hen Wlad Fy Nhadau” (Land of my fathers) and this is invariably greeted with howls of protest from my three kids in the back of the car.

Tradition has it that I then recount an episode from my time at primary school when the headmaster, Mr John Garnon, gathered his young pupils to learn the Welsh anthem. Before teaching us the song, he delivered a rousing speech in which he described watching the Welsh rugby team playing at what was then the national stadium at Cardiff Arms Park. He gave a detailed account of the magnificent build up to the match – the packed stands, the Welsh dragon flags, the band striking up for the national anthem. And then his deep shame, as a proud Welsh man, on seeing how many of the crowd appeared not to know the words of their national song. His booming verdict reverberated around a hall of silent pupils: “No child of mine, no child from this school will ever stand in the Cardiff Arms Park and not be able to sing the anthem”.

So it is that 40 years on I am still word perfect when it comes to “Hen Wlad Fy Nhadau” and will never disgrace myself if ever I get a ticket to see the Welsh rugby team at their new home in the Millennium Stadium. Even though my Welsh never got beyond the now defunct O level, I grew up surrounded by two languages, taking for granted that next door neighbours defaulted to their native Welsh then switched seamlessly to English as required. While lessons were delivered in English at the particular schools I attended, for some reason all commands at primary school were in Welsh language eisteddwch, sefywch (sit, stand). Songs and rhymes in both languages were a matter of course. I assumed it was natural to be able to function in two languages and I sometimes wonder what my own children are missing out on in their monoglot English environment. At any rate, the annual drive home delivers linguistic comfort at every turn with the familiar street signs Araf, Pant cudd, Canol y dref, Dim marciau ffordd (slow, hidden dip, town centre, no road markings). Signs that mean nothing to my kids but which are a reminder to me that even a non-native speaker can be deeply rooted in their linguistic heritage.