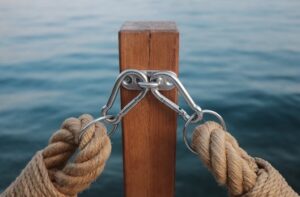 German has the honour of having loaned some spectacular vocabulary to English. Where would we be without Schadenfreude, Zeitgeist and Wanderlust? Some of the borrowings are more mundane in the sense that they have been fully absorbed into the English lexicon and would not strike most native speakers as foreign. Examples include noodle (Nudel), lager (from Lagerbier), and hamster (originally referred to as the “German rat”, so you can see why a rebranding has helped boost the popularity of this animal).

A recent project took me to the world of alpinism and the technical gear a mountaineer might take with them to tackle the peaks. Perhaps it is not surprising that English has borrowed heavily from other languages in this area given our relative lack of really challenging mountainous terrain. At any rate, one of my favourite German borrowings is the verb abseil, which few English speakers would be able to parse as the German prefix ‘ab’ (meaning down) and ‘seil’ (referring to the rope). American mountaineers meanwhile have borrowed from French in this context, opting for rappel to describe lowering yourself down a rock face on a rope. The German karabiner is sometimes used with the original spelling, sometimes anglicised to carabiner, and in informal contexts even abbreviated to biner. The full term is Karabinerhaken, which was a metal hook with a spring opening mechanism used by soldiers to attach their musket, or carbine, to a belt. And this takes us to the French carabinier and evidence that the European languages have exerted mutual influence over each other for centuries.

Discovering a previously unknown etymological story is an unbeatable pleasure for a translator, even more so when it sneaks up on you unexpectedly. So, while wrestling with the instructions for building a model submarine and reflecting on the very strange and diverse translation tasks that cross my desk, I was idly typing out ‘anti-aircraft gun’ for the German Flugabwehrkanone when the penny dropped that this was the origin of the term flak. I’m not sure why it had never occurred to me before that this was a word with German origins; after all that final ‘k’ has all the hallmarks of just such a borrowing. There is an additional charm in the way English has adapted this term firstly to refer to the missiles (i.e. the anti-aircraft fire) rather than the gun itself and then to encompass a more symbolic meaning, which is now the more common usage, referring to strong criticism, censure or disapproval. The term is a favourite in contemporary politics, as in a Guardian heading from earlier this year “PM dodges MPs again as junior minister takes the flak”.