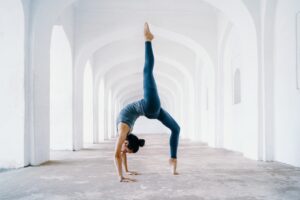 I take up yoga on a regular basis and drop it again just as regularly in despair at my less than flexible limbs. There is only so much humiliation a person can take in an exercise class! Despite my inauspicious track record when it comes to sticking to a yoga routine, I was reasonably confident that my regular but sporadic immersion in classes combined with my forays into Pilates and other gym classes would equip me well for a recent yoga translation project. Indeed, a series of yoga videos and a set of product descriptions for workout gear have inspired me to have another go at coaxing my reluctant muscles into some stretches and poses! Meanwhile, what was interesting about this translation work was the strategy I developed of checking all the yoga pose translations via Sanskrit, which is not a language I have any understanding of. Taking the German term for each yoga pose or “asana” and determining the equivalent Sanskrit term was the most reliable way to identify the correct English description for each exercise.

Some German yoga terms have direct and obvious equivalents in English. For example, a yoga routine might include the Berghaltung – Mountain Pose (Tadasana), Pflug – the Plough (Halasana), Delfin – the Dolphin (Shishumarasana), or herabschauender Hund – Downward-facing Dog, or Downward Dog for short (Adho mukha svanasana).

Other terms are sufficiently similar to be translated correctly as long as you are reasonably familiar with basic English yoga vocabulary. For example, Flankendehnung is not just a side stretch, as you might imagine from the German, but an extended side angle (Utthita Parshvakonasana), while the gedrehte Dreieckshaltung is not a twisted or rotated triangle, but a Revolved Triangle pose (Parivrtta Trikonasana). In both these cases, the ability to double-check the English term via the common Sanskrit equivalent is an excellent way to make sure you are using the correct language.

Other German yoga terms have even less obvious translations in English and will not feature in your average German to English dictionary. For example, the Schneidersitz makes no reference to a “tailor” in English; the correct term is the Easy Pose, which is sufficiently unimaginative that English-speaking yogi often resort to the Sanskrit term Sukhasana. And while the German yoga pose known as the halbe Drehsitz can be translated into English as the Seated Twist pose, a quick check of the official asana name, Ardha Matsyendrasana, reveals that English also gives this pose the more poetic name “Half Lord of the Fishes”. Similarly, without referencing the Sanskrit Baddha Konasana, it would be difficult to work out that the geschlossene Winkelhaltung im Sitz refers to an asana known in English as the Bound Angle, Butterfly or Cobbler’s pose.

Finally, specialist vocabulary such as this invariably reveals the shortcomings of machine translation. I particularly enjoyed the German for child’s pose (Kindeshaltung) being rendered as “child’s attitude”. This reminded me of my own rather immature and petulant response on being instructed to adopt this supposedly straightforward and relaxing pose and discovering that my unaccommodating calves have other ideas!