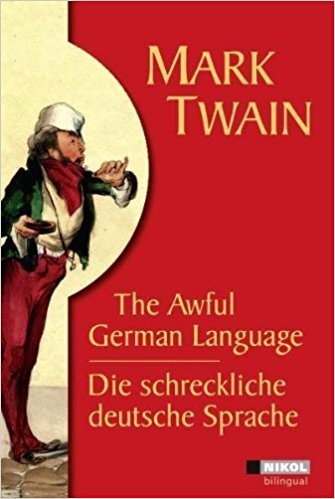 My recent blog about John Le Carré’s paean to the German language prompted me to revisit the rather contrasting essay by American writer Mark Twain in which he humorously details his almighty tussle with German. His full essay is well worth reading, particularly for students of German, but many of his difficulties will be familiar to all foreign language learners.

Every student of a foreign tongue begins by embracing the rules only to be tripped up on the inevitable exceptions and Twain proclaims German to be a particularly slippery beast in this regard, “Surely there is not another language that is so slipshod and systemless”.

With mounting fury he describes German’s passion for “parentheses” – the habit of starting a sentence, then diving off into a sub-topic, before diverting into another aside, which leads to a further sub-plot, before possibly returning to the original case in point. Or as Twain protests “It reminds a person of those dentists who secure your instant and breathless interest in a tooth by taking a grip on it with the forceps, and then stand there and drawl through a tedious anecdote before they give the dreaded jerk. Parentheses in literature and dentistry are in bad taste.”

All this is compounded by the tendency in the German language to install the verb right at the end of a sentence, “in a German newspaper they put their verb away over on the next page; and I have heard that sometimes after stringing along the exciting preliminaries and parentheses for a column or two, they get in a hurry and have to go to press without getting to the verb at all. Of course, then, the reader is left in a very exhausted and ignorant state”. In his section on suggested improvements to German language, Twain proposes “that this important part of speech should be brought forward to a position where it may be easily seen with the naked eye”.

As if waiting for the verb were not frustrating enough for the English speaker who is used to having such information up front, German also has separable verbs with one part appearing at the start and the other right at the end of the sentence. “The German grammar is blistered all over with separable verbs; and the wider the two portions of one of them are spread apart, the better the author of the crime is pleased with his performance”, bemoans Twain.

Then there are the many flavours of adjective caused by declination. “When a German gets his hands on an adjective, he declines it, and keeps on declining it until the common sense is all declined out of it. It is as bad as Latin.” This is at least in part related to having gendered nouns, another notion which totally baffles English speakers. Twain sums up their misery, saying “In German, a young lady has no sex, while a turnip has. Think what overwrought reverence that shows for the turnip, and what callous disrespect for the girl.”

And finally Twain channels his wrath on that most clichéd German quirk, the compound noun: “These things are not words, they are alphabetical processions. And they are not rare; one can open a German newspaper at any time and see them marching majestically across the page”. He has a simple solution: “I would do away with those great long compounded words; or require the speaker to deliver them in sections, with intermissions for refreshments.”