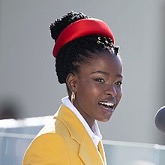 Translation is not often top of the news agenda but that is exactly what happened over the Dutch translator selected to work on Amanda Gorman’s first collection of poems, including “The Hill we climb”, which she read at US President Joe Biden’s inauguration. The Dutch publisher Meulenhoff approached author Marieke Lucas Rijneveld to translate Gorman’s book and Rijneveld was clearly delighted at the prospect, tweeting “Prachtig nieuws” and later in English saying, “When I was asked to translate all I could do was say yes and get behind her.”

The excitement did not last long, however. Complaints began flooding in on social media, pointing out that appointing a white author to be the voice for a Black writer was at best insensitive. Admittedly, other criticisms were also raised. Rijneveld, who identifies as non-binary and requests “they” pronouns, is not a spoken word artist, nor do they have any experience of translation. In fact, Rijneveld is said to have admitted their English is “very bad”. Personally, I would take that with a hefty pinch of salt because the Dutch concept of “very bad” English usually equates to near fluency. I would also suggest that skill in the target language outweighs anything else for literary translations, particularly poetry.

In any case, the most dominant theme in the criticism of Rijneveld’s appointment related to ethnicity. Dutch cultural activist Janice Deul described the decision as incomprehensible, stating that Gorman’s “work and life have been coloured by her experience and identity as a black woman” and asking, “why not choose a writer who […] is a spoken word artist, young, female, and unapologetically Black?”.

Two days after Rijneveld’s initial announcement, they withdrew from the project and the publisher issued a statement saying “[we will] learn from this, through dialogue, and we are going to walk down a different path with the new insights.”

What should we make of this? It is worth noting that Gorman and her team had apparently approved Rijneveld’s appointment, with Gorman retweeting the initial enthusiastic project announcement. Is it appropriate to draw up compatibility lists like this, where translators must tick specific boxes to qualify to work on an author’s texts? Rijneveld’s own work has been translated by Michele Hutchison, who provided the English version of the book “The Discomfort of Evening”. Hutchison is over two decades older than Rijneveld, she does not identify as non-binary, and she is rather conventionally married to a Dutchman with whom she has children. Does any of this detract from her ability to translate Rijneveld’s work? Not in the eyes of the International Booker panel, who announced Hutchison-Rijneveld as joint winners of their prize in 2020. Someone more eloquent than me suggested that sometimes panicked overcompensations are a necessary price to steer the ship in the right overall direction, so perhaps that is not a bad outcome in the Gorman translation controversy even if it is at Rijneveld’s expense.

Everything you need to know about the controversy over a new translation of Amanda Gorman’s poetry.