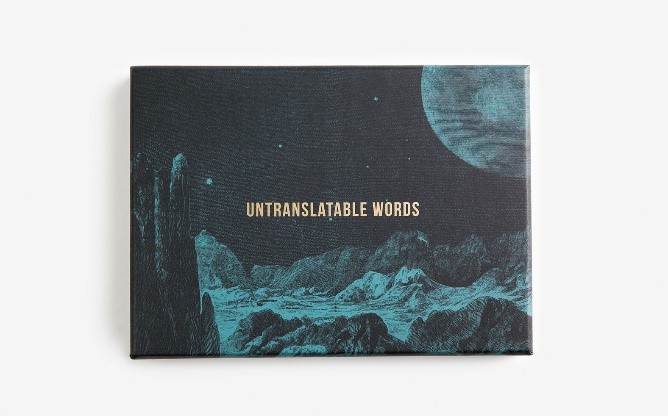 A while ago a friend gifted me a little box set of “Untranslatable words”. Inside is a set of cards, each with a word in a foreign language describing a concept for which there is no direct equivalent in English. Even non-linguists seem to enjoy the idea that another language might have a specific word or phrase for something which requires a whole paragraph to explain in English. For instance, a random rummage in my box of untranslatables brings up L’esprit de l’escalier (French) “The witty or cutting retort that we should have delivered […] but that comes to mind only after we’ve left the gathering and are on our way down the stairs.”

There is something delightful about the idea that speakers of a different language have collectively decided that something is so important it requires its own word. And learning about these words identifies entertaining gaps in our own vocabulary as well as highlighting concepts and situations which are often incredibly familiar but which, for some reason, have never warranted a specific label. For instance, why has English never realised the need for an equivalent to the Czech Litost to describe “The humiliated despair we feel when someone accidentally reminds us, through their accomplishment, of everything that has gone wrong with our lives”. Although the pedant might point out that some artistic licence is at work in this definition and that “self-pity” or “regret” might be perfectly fine translation options.

This fascination with arguably untranslatable words has spawned a range of books from Nicola Edwards “What a Wonderful Word: A Collection of Untranslatables from Around the World” to Ella Frances Sanders “Lost in Translation: An Illustrated Compendium of Untranslatable Words” or Yee-Lum Mak’s “Other-Wordly: Words Both Strange and Lovely from Around the World”. Common to all these texts is a delight in language and a belief that learning an unusual item of vocabulary might enrich our world view, maybe even opening our eyes to something we had previously only been peripherally aware of.

I may be biased as a German translator, but this linguistic pinpointing of fundamental human experiences is something Germans excel at. In my little box set, most languages are represented by a single card, Spanish and Japanese manage two entries, but German has three cards to its name. The concept of Schadenfreude (pleasure derived from someone else’s misfortune) has proven so essential it gained its own OED entry back in 1982. It’s a classic example of the German talent for using compound nouns to express complex psychological concepts. For instance, how does English get by without the notion of Torschlusspanik, (gate-closing + panic). The fear that time is running out, that you have missed the boat and opportunities have passed you by. Or what about Zugzwang (move + compulsion), a situation in which a player is forced to make a move, even though not moving would be infinitely preferable (originally applicable to chess, now also used figuratively). Or the equally splendid Kummerspeck (grief + fat), excess weight or body fat gained due to emotional overeating.

A Joyful & Malicious History Of ‘Schadenfreude’