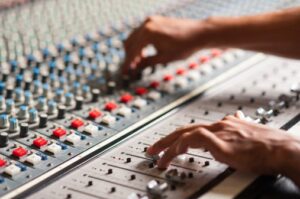 The previous blog post highlighted the way technological advances in sound editing have potentially tempted directors to defer responsibility for the clarity of recorded dialogue to the post-production sound engineers. Technology has had a huge impact on the modern film industry, enabling all sorts of tricks and special effects that would have been unimaginable in the early days of making movies. But in this case, somewhat ironically, instead of making things better, the ease of tweaking things and the number of the options available may be making film crews more slapdash about the way they record the original soundtrack.

Another technological evolution that has had a huge impact on the overall soundtrack and clarity of dialogue is the ability to add music and background sounds to build atmosphere. Again, with endless options available to refine the soundscape, some within the industry believe there is too much tinkering and adding in noise; all at the cost of intelligibility.

But surely the fastidious editing and post production process should be identifying and remedying unintelligible dialogue? This is where another factor comes into play that will be no surprise to anyone with a passing knowledge of psycholinguistics – the more familiar you are with the dialogue, the more easily you understand it. As the sound editor listens repeatedly to the script, they know what’s coming. The brain is brilliant at filling in any gaps, so the perception the editor gets is that the dialogue is perfectly clear. Sound editor Karen Baker Landers calls this “passive listening”. This underscores the importance of audience testing and getting naïve listeners to report back on the intelligibility of the dialogue.

Finally, the cultural shift towards home streaming rather than going out to the movies has also had an impact on intelligibility due to inferior quality home entertainment equipment. The home environment may also be subject to more ambient noise, although cinemas are often plagued with noisy popcorn munchers! And then there is the quality of the streaming audio mix itself, which may be different to the one created for a theatrical release. Sound editor Donald Sylvester suggests the creation of a stereo sound mix for home streaming is like “taking a beautiful steak and dragging it through the dirt.”

But intelligibility is not the only factor driving the increasing popularity of subtitles. Although they are primarily designed for the hearing impaired, subtitles are hugely popular with younger people who have perfect hearing. My seventeen year old has the subtitles permanently switched on for whatever she is streaming. A survey by the deaf-led charity StageText showed that 80% of 18-25 year olds use subtitles some or all of the time. By contrast, less than a quarter of those aged 56-75 said they do so, even though people in the older age bracket were more than twice as likely to describe themselves as being deaf or hard of hearing.

In my non-statistical sample of one young person, various reasons were suggested for her love of subtitles. The first is echoed in the StageText survey: having subtitles switched on enables you to follow the content despite multiple other distractions. You can scan the subtitles then quickly check your phone for DMs or Instagram updates, or you might like to chat live to a group of friends while watching programmes or movies with the sound turned off. My daughter highlighted another surprising bonus of subtitles, which is that they can make scary content less terrifying, for example by indicating “[scream]” before the relevant scream-inducing event takes place. This defuses the tension by signalling (or spoiling, depending on your perspective) an up-coming jump scare.