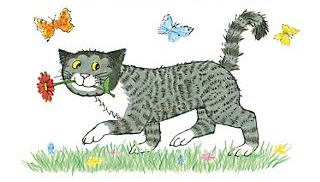 In May this year, the children’s author and illustrator Judith Kerr died at the age of 95. She is probably best known for enduring classics such as “The Tiger Who Came To Tea” and the Mog books. Her books have been translated into 20 different languages and one of these translations caused a problem that will delight translators everywhere. The first book in the Mog series is entitled “Mog the Forgetful Cat”. Quite a simple matter in English – a gender neutral cat with a memory problem! In German, however, there is a choice to be made between “Katze” or “Kater” for male or female. I’m not sure if the translator consulted Kerr on this subject. She herself later suggested that the male option was chosen because “feminism hadn’t really hit there yet”. At any rate, in Germany the book became “Mog der vergessliche Kater”. With Kerr’s trademark understated sense of humour she commented: “I waited some years then gave Mog kittens and let them sort it out.”

The language used in the Mog books is itself distinctive, as Kerr explains: “I determined that, like Dr Seuss, I would use a vocabulary of no more than 250 words in the book about Mog and I have done this with all my picture books since”. If you ever listen to an audio version of the books you will also realise just how much of the narrative is actually captured in the pictures rather than the text. The tapes my own children listened to included rather intrusive explanatory text to cover plot points that were dependent entirely on the pictures, e.g. “Mog jumps up at the window, startling Mrs Thomas and causing her drop the peas.”

Kerr would have been particularly sympathetic to the linguistic challenges children face when reading books because she repeatedly had to tackle new languages as her family fled Nazi Germany in the years before the Second World War. With temporary stops in Switzerland and France before finally settling in England, Kerr was trilingual by the age of thirteen. Before leaving Berlin she had battled with the idiosyncrasies of learning English and she recalls: “Never, never, never, I swore to myself, would I learn this absurd and useless language.” But needs must, and within a short time she had mastered English in addition to French and German.

Fittingly Britain’s first bilingual German-English state school was named after her, and the Judith Kerr primary school in Herne Hill embraces the importance of language learning from an early age in a way that is truly radical and unique in the British education system. As their website proudly declares: languages are fun, languages make you brainy, languages connect people, languages bring perspective. What a wonderful legacy for one of this country’s most celebrated children’s authors.