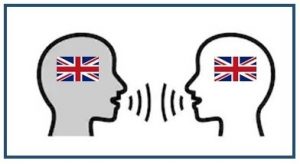 English is a global language and inevitably has influenced vocabulary in other languages. For whatever reason, there often seems to be a certain cachet associated with English phrases and lexical items. In German, marketing texts in particular have a fondness for lobbing in English vocabulary. Unfortunately for the translator, these often sound far from authentic when the text is translated back into English. And to compound the translator’s woes, when you rephrase the English to make it sound like actual English, it’s not unusual to have the client question why you are rewriting “perfectly good English”. Translating English into English is not only hard, but also often controversial.

This post takes a little tour of some examples where English may need re-translating. For instance, sometimes a word has been borrowed by a language but the meaning may now be subtly different from the English usage. A good example of this is the use of “trend” in German, particularly in formations such as “Trendartikel”. While the translation “trendy products” captures the sense of being “fashionable” and “up to date”, it also has a slightly negative undertone, suggesting something of a “passing fad”. The German uses the English loanword to mean something highly fashionable, elegant and desirable, whereas the direct translation in English hints at something ephemeral, and maybe slightly superficial or even in poor taste due to being very much “of the moment”. That’s not the desired sense at all.

Sometimes the meaning of a loan word is directly comparable but the tone or register is slightly off. A good example of this is the term “know-how” – Germans absolutely love this word and sprinkle it liberally in all sorts of texts. There is no issue with subtle differences in meaning here, the term can be used in exactly the same way in English without altering the meaning at all. The question is a stylistic one. In English the phrase has a slightly informal feel to it. Maybe this is nitpicking, but you need to ask whether an English writer would naturally be inclined to use the term “know-how” in a formal or technical text. My instinct is that in many contexts it is better to replace it with “expertise”, “skill” or “capability”.

The two examples discussed so far are reasonably subtle. There are other occasions where English is used that is incorrect, and it isn’t always easy to spot. One text I worked on referred to a “self balance scooter” in German, it took a bit of investigation to establish that this is much more likely to be called a “self-balancing scooter” in English. Getting the correct terminology may be vital for search engine optimisation. Then there are English terms that simply don’t exist in English. For instance, German has “der Best Ager”, which is a play on “teenager” referring to an older person. It’s not unusual to find this left unchanged in English translations, even though an English reader wouldn’t have a clue what it means. Maybe we will eventually borrow it back as a genuine English term but, in the meantime, a better option is “someone in the prime of life” or similar, implying older but still in fine fettle.