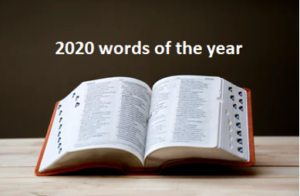 Around this time each year, I generally review the various “Word of the Year” nominations from dictionaries and media outlets around the world. If language use captures the zeitgeist, it seems fitting that 2020 is the year we broke “Word of the year”. Oxford English Dictionary admitted defeat in selecting a single word to encapsulate an “unprecedented year”. In fact unprecedented could well have been on their target list but had to jostle for position among a host of other contenders. Merriam Webster uses statistical analysis to identify the most frequent dictionary searches and, unsurprisingly, declares pandemic as its 2020 nominee, but that is only the start of the story.

The OED report begins with a timeline showing the point during the year when various significant words achieved peak frequency of use. It illustrates the surge in the pre-existing word coronavirus and describes the completely new term Covid-19, recorded on 11th February in a WHO report and entering the OED in April (surely some kind of lexicographical record!).

Whatever your favourite lexical category, there is something for you in the OED round-up. In addition to Covid-19, we have other neologisms, such as twindemic – referring to the potential for the winter months to see Covid cases coinciding with seasonal flu – and anthropause – coined in June 2020 in an article in Nature referring to a period of unusually reduced human mobility.

Both these coinages are portmanteaus – the blending of two words to create a new meaning. I feel we should skim over the ghastly staycation, which has been a feature for many of us this year, revelling instead in the linguistic creativity that brought us covidiot (no explanation needed) and coronials (coronavirus + millennials) for the babies conceived during lockdown! My personal favourite is Blursday, not a new term, but one that beautifully describes the feeling that one day of the week is not much different from the one before.

Several existing words have acquired new significance this year. For those of an addictive tendency when it comes to endless immersion in rolling bad news, this was your year to shine. Never has the potential for doomscrolling been greater, let’s hope it is a while before this habit is quite so prevalent again. The term superspreader dates back to the 1970s but saw a big revival in the early months of the year with a further quadrupling in usage during October, coinciding with the spread of cases at the White House. And we haven’t even mentioned bubbles, furlough, R-number, PPE, or lockdown.

As befits an era fixated on internet outrage and public condemnation of misdemeanours, we have the new phrase mask shaming. This is a fine example of a contranym, a word with two opposing or contradictory meanings. You can shame someone for failing to don a mask or (perhaps if you are a covidiot) you can shame someone for choosing to wear a mask.

Slang has also contributed various additions to our lexicon to keep pace with events. My own 12-year-old regularly refers to the rona (corona virus), and I rather like the Australian sanny (for hand sanitiser). The surge in online meetings and home schooling led to an unfortunate rise in Zoombombing where a video session is hacked and infiltrated with offensive content.

Finally, as if keeping pace with a pandemic wasn’t enough, the lexicographers at OED remind us that back in January we were absorbed in climate change with the worst Australian bushfire season on record and, from June, coronavirus news took second place to the Black Lives Matter protests. Both these events influenced vocabulary usage in their own right. What could 2021 have in store?