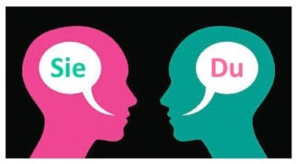 As a native English speaker, I have always been fascinated by the distinction between formal and informal pronouns made in other languages, sometimes called the personal pronoun minefield. The social niceties woven into the simplest form of address is one of the most obvious differences between English and other European languages (along with gendered nouns, but that is a whole other blog post). In translation work, marketing material from a company will often come with a specific instruction as to which pronouns should be used to address the target audience. Far from being irrelevant to a translator working into English, this can give subtle clues about the desired tone for the translation.

The choice of informal/formal pronoun will depend on company style and the demographic of their audience, and it may even vary within a single company. I came across an example of a large publishing company that uses “Sie” (formal) in general, but in recruitment materials for a scheme aimed at younger people, they switched to “Du” (informal). This shift in tone might be captured by a more informal style and choice of vocabulary in an English text.

For translators working in the opposite direction, from English into a language that does distinguish formal and informal pronouns, deciding which to use is even more significant. An old version of a Wikipedia page (now deleted) claimed that a German DVD release of Gone with the Wind had subtitles adopting the formal “Sie” while the actors were dubbed using the familiar “Du”. While this might be an apocryphal tale, and hence edited out of Wikipedia, similar examples are not hard to find. The German subtitling thread on the Stack Exchange site includes a reference to Black Mirror subtitles on Netflix switching between “Du” and “Sie” between the same characters even within a single conversation!

Choosing the right personal pronoun is a veritable minefield for non-native speakers. Age, social or professional status all matter. But habits also change over time and vary even within a single country. Germany’s international broadcaster, Deutsche Welle, describes a phenomenon referred to as the “Hamburger Sie”, where a speaker might use someone’s first name (considered informal) combined with the “Sie” form of address (formal).

During my MPhil in Linguistics (many years ago) I explored the potential influence of English on pronoun usage in Welsh, which distinguishes “ti” (informal singular) and “chi” (formal & plural). I surveyed pronoun usage at a Welsh language comprehensive school to compare children with two Welsh speaking parents with those who had one or two English speaking parents, where English tended to be the dominant language at home. There was indeed a difference, with the English-influenced kids preferring “chi” in far more social contexts than their counterparts. I speculated that they may be simplifying their Welsh usage in line with the single-pronoun English system, showing a preference for the more generic “chi”, which can cover both plural and singular forms.

Like most English speakers navigating pronoun usage, my time spent living in Germany was littered with pronoun mishaps. I still shudder at the recollection of the social faux pas I committed by inviting some older acquaintances to address me with “Du” (informal). There was a stunned silence and my suggestion was politely ignored. I never dabbled with pronoun suggestions again. The significance of an invitation to switch pronouns is beautifully captured by Jeremy Butterfield’s tweet early in the coronavirus crisis: