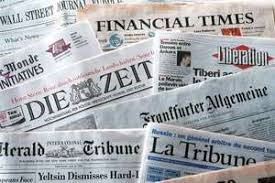 All too often recently I have withdrawn from following current affairs in a bid to protect my sanity. But when I dared poke my head out to see the latest excitement that Brexit Britain and the Tory leadership campaign has to offer, I noticed that language in the media has been attracting attention. First to catch my eye was a large number of people requesting that journalists stop referring to our prospective new PM as “Boris”, preferring instead the more formal “Johnson”. The rationale for this is simple. “Boris” implies an essentially harmless, comic character, conveniently distracting from his potential for political gaffes and other misdemeanours. Think “Boris stuck on zip wire” rather than “Johnson visited by police following domestic dispute”. When used by political commentators, “Boris” translates into an affable, even chummy relationship that is quite inappropriate in the interests of neutrality. The relationship between politics and the media just feels to cozy in this situation.

The naming problem, however, is not easy to fix. “Boris” is far more instantly recognisable than “Johnson” due simply to its relative rarity as a name. It is no coincidence that Delia became known simply by her first name, with the ubiquitous “Smith” omitted. The other remaining contender for the Tory leadership (to be decided by party members on July 22nd) has the misfortune to have the same first name as the leader of the opposition. Not to mention a surname which is easily mispronounced in a most unfortunate manner. There is even a YouTube compilation of “All the people who have ‘accidentally’ mispronounced Jeremy Hunt’s name on live TV or radio”.

While the Conservative party continues to self-implode over Brexit, it has been left to the world’s school children to remind us that we are facing an unprecedented catastrophe from extreme changes in the climate. The Guardian recently made a decision to change its style guide to reflect the scale of the problem through the use of more appropriate language. So “climate emergency, crisis or breakdown” are preferred over the more neutral “climate change”, and “global heating” is favoured over “global warming”. This guidance was issued to ensure that the paper’s content more accurately reflects what editor-in-chief Katherine Viner is calling “a catastrophe for humanity”.

With Boris Johnson still potentially on track to become the UK’s next prime minister, and no great political shift in sight in terms of tackling our climate crisis, both of these linguistic affairs are a reminder that language matters when it comes to political discourse, and language is central to the shifting relationship between politics and the media.