Latin language …. And other things the Romans did for us 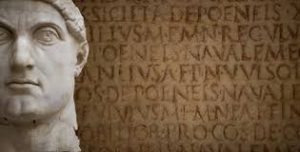 On a recent trip to Italy and having visited several Roman historical sites such as the coliseum, Herculaneum and Pompeii, I was struck by how many things in Western civilization have been influenced by the work of the Romans, going way beyond the influence of the Latin language. Here are my top five …

Originally brought to Italy (specifically Latium on the banks of the river Tiber) by Indo-European migrants in approximately 1000BC, Latin started as a local tongue spoken within a small community. This community eventually became Rome. As the Romans spread and continued to conquest other areas they brought their language with them. In places such as modern day France and Spain, Latin mixed with the local tongues already spoken to become precursors to what we know as the Romance languages. Even in English (which is a Germanic language) we can see the influences of Latin. When the Romans came to our fair isle the majority of people could not read or write. The Romans wrote down their laws, history, literature etc. and passed this knowledge on to the British (and indeed much of our legal system comes from the Roman Empire methods). Although Latin was never fully adopted by the British population and it didn’t have as much of an impact on our language’s history as it has for France or Italy there are still remnants of Latin that we use on a daily basis: for example: exit, bona fide, terra firma, ad hoc, status quo are all firmly rooted in our lexicon. We also still use Roman numerals as well as the Roman calendar.

Throughout the ages, Latin has been associated with the educated elite, and continues to be, as Latin is still commonly used in the scientific and medical fields.

The saying goes ‘all roads lead to Rome’, meaning that all activities will lead to the same result in the end, or many paths will lead to the same goal; this is in fact because Romans built roads radiating out of a central place (i.e. Rome!).  They also built straight roads, some of which are still visible and used (in a more tarmacked fashion) in the UK today. Roman roads were not only straight but paved with cobblestones and had ditches either side for rainwater to drain away (better than the mud tracks we used to have that’s for sure!)

Clearly visible in sites such as Herculaneum and Pompeii is how good the Romans were at town planning. The streets are organized, houses well thought out with social buildings such as the public baths and ‘tabernas’ (where people bought refreshments from) built in convenient locations. Not only that, but they also had sewage systems and latrines. In houses of two or more levels they used pipes to channel the waste down to street level to be collected or underground where it was flushed away by a series of pipes and running water to a giant sewage tank. Another Roman invention, the Aqueduct, made this supply of running water possible.

Methods for heating buildings were developed by the Romans, particularly for residential dwellings and hot baths. Roman ruins excavated today show us the intricacies of the hot baths and houses and the level of detail of the decoration; they also show us how they were heated. They invented something called a hypocaust, which was a type of under floor heating; transmitting hot air from an underground furnace through the spaces left in the walls.

Who would have thought that the ordinary, dull, grey material actually originated from the Romans? That many Roman structures have stood the test of time is testament to the fact that they were excellent architects and builders. They mixed lime, volcanic ash (pozzolana) and water to create ‘Opeus caementicium’ (concrete), an immensely strong mortar – perhaps even better than what we use today! The concrete was used for buildings, roads and other structures. Perhaps one of the most impressive uses is in the Pantheon, which is visited by millions of tourists every year in Rome.

So, there we have it – the Romans were certainly a very clever bunch!

As the Latin goes ‘A bove majori discit arare minor’ (The young ox learns to plough from the older), and we can certainly learn a lot from the Romans.