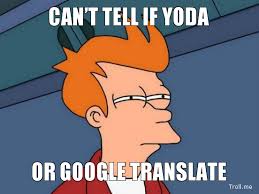 So, Google Translate (let’s call it GT from now on) is blowing out 10 candles on its birthday cake, and in part 1 we looked at how the tool can bring communities and people together, breaking through language barriers. Yes, granted this a handy thing to have at your disposal when travelling to find out what something is on a menu or when you need to figure out the gist of a piece of text. But, I’m not convinced that this should be relied on when conversing directly with other people, and particularly not for written texts. Why? Because you’ll probably end up looking rather foolish… 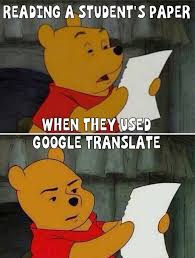 Fortunately, GT wasn’t a big thing when I was at school, studying languages at university or even when I was doing an MA in Translation. Perhaps nowadays it’s more of a common tool for students. I still remember carting around several dictionaries for use in classes. I’m guessing this is no longer common place with today’s students. They have numerous online dictionaries, applications and GT to play with! However, without sufficient knowledge of either the target or perhaps even the source language, simply entering a chunk of text to be translated and taking the resulting translation as it is without editing can lead to some comedic results. Let’s look at why this is….

The tool is built using a method called ‘statistical machine translation’, whereby large amounts of texts and their equivalent translations are aligned. The translation program creates translations based on parallels found in the ‘bilingual text corpora’ (existing translations created by humans) as well as ‘monolingual corpora’. The program searches for patterns and statistical parameters to help it ‘intelligently guess’ the best translation, all in a matter of seconds. The statistical parameters are usually built on the presumption that, for example, Phrase 1 in the source language = Phrase 1 in the target language (this is a huge over simplification of some very complex linguistic equations), and that this parallel applies in all situations. This is evidently not always true, and a phrase used in one language in one context is unlikely to be exactly the same in a different context.

As GT looks for chunks of translated text to match your input, it’s unlikely to find an exact chunk to match the whole of the phrase/paragraph you want to be translated. As such, it sticks together smaller chunks of text it has found in order to provide a translation, and not always in the right order! In finding the translated chunks the GT algorithm does not consider grammatical rules.

GT also struggles with some verb tenses, in particular the perfect and imperfect tenses in Romance languages, as well as the subjunctive.

Limited by the bilingual text corpora

As GT relies on a huge bank of bilingual texts, the amount of text it has at its disposable limits the translations it can provide. For European Union languages this is not really a problem, but for languages such as Tajik and Xhosa for example, for which the text corpora is relatively small, not only will results be limited but accuracy could be questionable also. Moreover, a lot of GT translations go via English (e.g. DE > EN > ES), which introduces more chance for error.

As mentioned in part 1, GT relies not only on human translations for the basis of its algorithms, but also on user contributions in terms of corrections, recommendations and translations of technical terms, for example to build it’s database and improve on translations. So, despite the fact that GT has come along leaps and bounds in the world of automated translation and in creating the an idealised ‘sci-fi style’ universal translator it still relies on human interaction, contribution and language knowledge in order for it to function and to provide somewhat meaningful translations.

The verdict? Google Translate; use with caution!