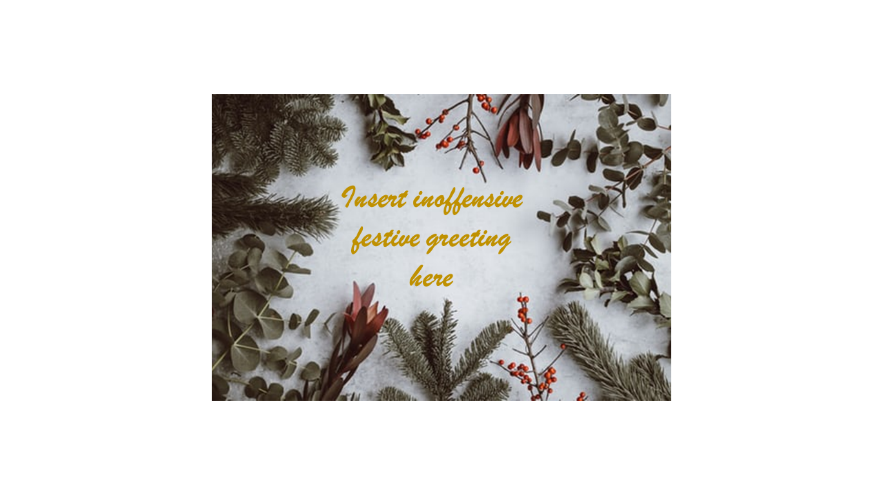 It’s almost as traditional as the tinsel, mince pies and yule log. No, I’m not talking about Christmas stockings, I’m referring to the debate about inappropriate festive greetings. Whether it’s claims that “Seasons Greetings” is offensive to Christians for failing to refer to the true reason for festivities, or suggestions that “Happy Christmas” is insensitive for failing to include agnostics, atheists and people of other faiths. But is the whole thing actually fake news?

A survey by the Public Religion Research Institute back in 2013 certainly showed a shift among Americans in favour of a non-religious phrase (at least for corporate greetings) compared with results for 2010. The data also reflected religious, political and demographic differences. Unsurprisingly, evangelical Protestants favoured the more explicitly religious greeting, as did Republicans and respondents over the age of 65. But nowhere in the PRRI survey does it suggest that respondents really cared whether their preferred greeting was used or that they were offended by the alternatives.

In fact the “War on Christmas” as it’s often referred to has earned its own page at RationalWiki, a site devoted to refuting pseudoscience and documenting crank ideas. Their suggestion is that this particular “war” is nothing more than a manufactured controversy (or gloriously a “manufactroversy”) orchestrated by some extremely dubious and unsavoury right-wing types who would love nothing more than for us all to believe that there is some kind of concerted attack on religious tradition. Frankly it’s rather reminiscent of some of the more spurious “political correctness gone mad” stories of the 1980s. Given the demographic data from the PRRI study, it is not surprising that Donald Trump has weighed in on the subject, whipping his supporters into a frenzy stating “If I become president, we’re all going to be saying Merry Christmas again, that I can tell you”.

If the Americans are getting hot under the collar about their festive greetings, an opinion piece in the Guardian reflecting on the PRRI survey suggests that, in 2013 at least, the UK wasn’t overly bothered about such linguistic niceties. Most people simply interpret “Merry Christmas” as a generic holiday greeting. And personally I’m yet to find anyone who genuinely thinks “Seasons Greetings” is some kind of conspiratorial plot to undermine the true spirit of Christmas.

Having said that, it’s not just Christmas greetings that can potentially land you in trouble. Back in 2018, Chinese supermodel Liu Wen wished her social media followers a “Happy Lunar New Year”, prompting a barrage of criticism from people who felt the phrase showed an overly friendly attitude to other countries while removing the specifically Chinese element of the greeting. Pressure mounted and Liu Wen’s Instagram feed was amended to wish people a “Happy Chinese New Year”.

So, with no wish to offend anyone, I will simply suggest “have a good one”, whatever that might be.