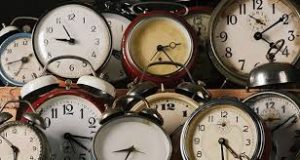 With a teenager in the house currently deep into GCSE revision, the concept of time looms large in our lives. On the one hand, X days till exam time – cue panic. On the other hand, Y days till total freedom and a 10 week summer holiday – jubilation. The weird way time has of speeding up and slowing down prompted her to complain recently that “you slog away for hours revising and then you treat yourself to something fun and it lasts like literally one millisecond”! This set me to thinking about how different languages measure time.

The lexicographer Susie Dent notes that while English still has the term “fortnight” (fourteen nights), we also used to have the delightful “sennnight” (seven nights) for a week. “Yestreen” meant ‘last evening’, “ere-yesterday” was the ‘day before yesterday’, and “overmorrow” the day after tomorrow. Some European languages with similar origins have retained their equivalent vocabulary, with German “übermorgen” (over + tomorrow) indicating ‘the day after tomorrow’ and “vorgestern” (before + yesterday) referring to ‘the day before yesterday’. Similarly Italian has “dopodomani” (after + tomorrow) for the ‘day after tomorrow’, while French has the rather charming “aujourd’hui”, which translates roughly as ‘on the day of today’. And if you feel could do with a few extra hours in your calendar, you may approve of the Welsh “wythnos” (eight nights) for a ‘week’, or the similarly generous word for a ‘fortnight’ – “pythefnos”, which means fifteen nights.

I love the old markers of time. To go with ‘fortnight’ (fourteen nights), English once had the lovely ‘sennight’ (seven nights) for a week, too. ‘Yestreen’ meant ‘last evening’, ‘ere-yesterday’ was the day before yesterday, and ‘overmorrow’ the day after tomorrow.

My current favourite esoteric time word has to be “nychthemeron”, which denotes a period of 24 consecutive hours which can start at any time, not just midnight. This also avoids the lack of clarity surrounding the English word “day”, which can be associated both with a calendar “date” starting and ending at midnight, but also with “daytime”, i.e. the hours of daylight. Some languages have this concept of a 24 hour period built in to their standard vocabulary. Perhaps it is no coincidence that Iceland, the land of the midnight sun, contrasts “sólarhringur” (sun-circle) with “dagur” (day). While Finnish has “vuorokausi” (turn period) for 24 hours versus “päivä” (day).

If you are intrigued by these differing linguistic approaches to measuring time, take a look at the time section in the Wikipedia source below for humorous units of measurement. Having visited New York last Easter, I enjoyed the concept of the “New York Second” defined as ‘the period of time between the traffic lights turning green and the cab behind you honking’. And those of us who have followed the rapid turnover of staff within the Trump administration will delight in the unit of time known as the “mooch”, named after Anthony Scaramucci and representing a period of ten days, the duration of his tenure as White House Communications Director.