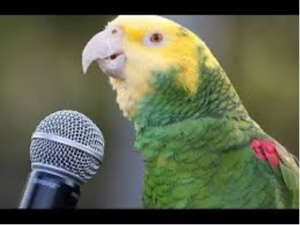 I always have an eye out for linguistic curiosities that might entertain readers of this blog, so this week I bring you a round-up of talking parrot news (as a little bird told me to)! The first story that caught my eye was about Nigel, an African Grey parrot, who spoke with a British accent mimicking his owner Darren Chick (you couldn’t make this up). Nigel went missing from Mr Chick’s California home, only to be returned to him four years later speaking Spanish. It turned out that Nigel had been acquired by another family at a garage sale and that Nigel (now renamed Morgan) had learned Spanish from the family’s Guatemalan grandparents. In a touching denouement to the tale, Mr Chick decided to let Nigel/Morgan stay with his new family, where he could continue his bilingual dialogue.

It turns out that parrots talk for very similar reasons to humans: peer pressure. In the wild, parrots mimic other members of the flock to communicate information. In captivity, their human owners become their sole source of interaction and parrots use their hearing and imitation skills to form a social bond. The birds want to fit in and, if deprived of sensible parrot conversation, they just make the best of it and communicate with humans instead. And they are extremely good at it (as a little bird told me; sorry).

Their uncanny mimicry skills sometimes get parrots into trouble, as the owners of Lincolnshire Wildlife Park discovered when five of their newly acquired parrots took to swearing at the visitors. Luckily, most people seem to have been entertained rather than offended by the verbal onslaught. “When a parrot tells you to f*** off, it amuses people very highly”, says CEO Steve Nichols. Nevertheless, the birds have now been separated so they don’t “set each other off”.

The Lincolnshire Wildlife Park runs Britain’s national parrot sanctuary, which rescues abandoned pet parrots and parakeets. It is home to almost 2000 birds and aims to allow the birds to live naturally within a colony, emphasizing the importance of having other parrots to commune with. The fact that many of their animals are rescued means that human influence on the birds is a frequent feature. Before the foul-mouthed parrots hit the news, another Lincolnshire resident, Chico, found fame with his renditions of popular hits, including Beyoncé’s “If I were a boy”. Chico even got his own Instagram account and appeared on “This Morning” to show off his singing skills.

Leaving no stone unturned in the research for this blog, I then came across Einstein, a talking parrot with a vocabulary of over 200 words and sounds. My son happened to be off school sick while I was working on this piece, so he joined me to watch Einstein’s entertaining TED talk (see sources). Suffice to say, my son now thinks being a translator is the most fun job in the world since it apparently involves watching video content of talking, singing, swearing parrots. A little bird told me that this impression may not last, but for now, I am basking in the glory…