It is only a short while since this blog examined the fraught history of virus naming, but Covid seems determined to keep this topic in the news, so here we are again. Having recognised the potential harm of naming viruses after the geographical locations in which they were discovered, in May 2021 the WHO announced a system of using the Greek alphabet to provide convenient, non-stigmatising names for new mutations. 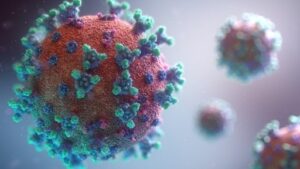 The WHO uses the lettering system to name two types of Covid mutation: variants of concern and variants of interest. To qualify as a variant of concern, for example, a mutation might exhibit an increase in transmissibility or virulence, or be associated with a decrease in the effectiveness of public health measures etc. Some variants that were named using the Greek lettering system were subsequently downgraded when they were deemed no longer of interest or concern. A third category of Covid mutations includes ‘variants under monitoring’, which do not qualify for Greek letter names.

When the Omicron variant was named in late November 2021, it was widely reported that two Greek letters had been skipped over by the WHO: nu and xi. Although no explanation was provided, it seems the likely rationale was that ‘nu’ could readily be confused with the English word ‘new’. I think we can all be relieved we avoided having to talk about the “new nu variant”. Two suggestions were proposed to explain why ‘xi’ was skipped. Firstly, it was said to be difficult to pronounce, although this depends on your native tongue of course. And even English speakers, who aren’t familiar with a /ks/ consonant cluster at the start of words, have no problem with this sequence at the end of words (clocks) or mid-word (claxon). The second problem with ‘xi’ is that it is a common name in China, albeit pronounced /shi:/ rather than /ksi:/. As this is the first name of the current President of China, it is easy to see why this choice might fall foul of the WHO’s stated aim of “reducing negative impact from names”.

What the WHO might not have predicted is the transatlantic tussle between US and UK English speakers over the pronunciation of Omicron. In US English, the first syllable is stressed, and the pronunciation is something like /’əʊmɪkrɒn/. To be honest, most British English speakers were not sufficiently familiar with the Greek alphabet to have an opinion about how to pronounce the latest Covid variant, but a swift dictionary consultation (backed up by students of Classics) reveals that the official UK pronunciation stresses the middle syllable, and sounds something like /əʊˈmaɪkrɒn/ (listen to the Cambridge Dictionary audio files for each). As various people wryly remarked on Twitter, “this was not the way I planned to learn the Greek alphabet”. At the time of writing, the US-style stress-pattern is winning out in terms of UK usage too.

The inevitable question is, what happens if we run out of Greek letters. Maria van Kerkhove, the WHO’s technical chief for Covid-19, told the Telegraph last summer that plans were already being made for this eventuality. She suggested that Greek gods and goddesses had been proposed but then rejected, in part due to concern over pronunciation issues, with star constellations in pole position as the next naming system. At any rate, the WHO seem to be wisely avoiding the option of a public poll to name new mutations, no doubt keen to avoid the inevitable “Virus McVirus Face” topping the vote.