The coronavirus pandemic has cast a fresh spotlight on the phenomenon of geographical naming illnesses. Whether intentional or not, the practice often suggests an element of blame and can stoke resentment against people associated with the relevant region. Donald Trump’s insistence on using the phrases “Chinese virus” and “Wuhan virus” was no accident. A photographer captured a script he was due to deliver where the word “corona” had been crossed out and “Chinese” handwritten in black marker pen above it. Trump’s defence of his nomenclature was always “descriptive accuracy”; after all, the epicentre of the initial Covid-19 outbreak was never in dispute. Whether or not you felt comfortable about the choice of phrasing became something of a shibboleth for your political affiliation, at least in the USA. 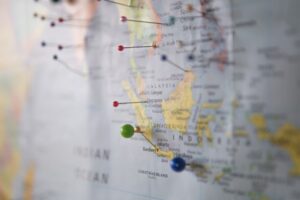 The World Health Organization advises against including geographic locations of any kind in its Best Practices for the Naming of New Human Infectious Diseases (published in May 2015). Also outlawed are people’s names, cultural references and animal species, and the stated aim is “reducing negative impact from names while balancing science, communication, and policy.”

One obvious risk of geographical illness naming is that it stigmatizes those associated with the region, potentially fuelling xenophobia or racism. Another danger is that geographical terms can be misleading or inaccurate. The H1N1 virus that swept the globe in 1918-1919 is still widely known as the Spanish flu even though the link with Spain has more to do with the politics of the period than revealing anything notable about the disease itself.

The link between a disease name and a location is not necessarily negative. In the late 17th century, a Swiss medical student, Johannes Hoffer, suggested a new diagnosis of nostalgia to describe “the pain a sick person feels because he is not in his native land, or fears never to see it again.” This affliction was said to commonly affect Swiss mercenaries fighting away from home, and the condition became known as the Swiss illness (or Schweizer Krankheit, mal du Suisse etc.). Imagine how flattering this is, proclaiming Switzerland to be such a magnificent country that being removed from it might cause you to become unwell!

However, the general trend for geographical illness naming is not a positive one. Germans are almost certainly not thrilled about their association with rubella – German measles – which was named after the three German physicians who provided the first clinical description of the condition in the 18th century. And just imagine living on the banks of the Ebola River, now inextricably linked with a severe haemorrhagic fever with an 83-90% fatality rate. The river’s association turns out to have been particularly unfortunate. In Peter Piot’s account of how Ebola was discovered, he recalls specifically avoiding naming the virus after the village of Yambuku, where it had first surfaced, to avoid stigmatising a specific location. Another researcher suggested a river name would reduce the focus on a specific place. The obvious choice was the Congo River, but this was already linked with a different illness. A map was consulted, and the Ebola River was decreed to be closest to the source village. This turned out to be inaccurate, another river was closer, but too late, the Zaire ebolavirus had got its name and the link was established.