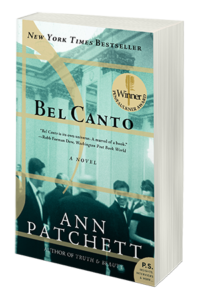 Fictional portrayals of translators are not particularly common (although this blog previously reviewed films featuring translators and interpreters), so it was with great excitement that I stumbled upon the character Gen Watanabe in the novel Bel Canto by Ann Patchett. Gen is the multilingual interpreter for Japanese businessman, Mr. Hosokawa. When a musical recital held in Mr. Hosokawa’s honour is disrupted by terrorists who take the entire group hostage, Gen becomes an invaluable go-between for this multilingual assembly of characters.

Gen is initially portrayed as a rather reserved person, most comfortable when simply passing on someone else’s words. As the hostage situation drags into days and beyond, he finds himself in a position where he can potentially influence the outcome through his role as interpreter. Initially he is deeply uncomfortable with this, the anonymous narrator tells us: “It should not be Gen’s responsibility, deciding […] what to tell and what not to tell.” But gradually he gains in confidence and begins to wield his power with some relish. In the negotiations over food supplies for the hostages, it is suggested: “Even though Thibault was the diplomat, Gen believed that he probably had a better chance of getting what they wanted.”

At times Gen gets carried away with his own importance. After translating a message from the Vice President, who is one of the hostages, Gen takes it upon himself to compliment him on his remarks, saying “very impressive”. The Vice President in return gives Gen “a look that made it clear he had no interest in editorials”. Later Gen even delays relaying a message knowing that nobody else speaks both Spanish and Japanese, so he will not be found out!

The international nature of the captives means Gen is constantly busy: “Every person in the room had a thought that was in need of translation”. And at times he reflects on the limits of simply relaying the linguistic content to get his messages across. As the intermediary for an official negotiator trying to secure the release of the hostages, Gen realizes words alone are inadequate, he “wished he could parody the weight of his voice”.

For anyone steeped in languages there are some unnatural elements to the set-up. Gen’s facility in so many languages is unusual for a start, and there is a key moment where he forgets that the English word for the Spanish “concienzudo” is “conscientious”, an unlikely lapse given the lexical similarity. Patchett also steadfastly refers to him as the “translator”, where of course he is an “interpreter”, but these are minor quibbles. The whole setting is deliberately stagy and operatic, realism is hardly the point.

Although Gen’s translations are frequently crucial, there are moments of high drama where language is redundant and he is all too aware of his limitations “even though Gen translated, a clear and simple word-for-word translation, every person in the room understood what she was saying without him.” Ultimately, Gen must seek a role for himself rather than simply being the conduit for other character’s stories.