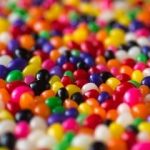 My previous blog on the differences between languages in the way they categorise the colour spectrum prompted an exploration of the etymological origins of colour words in English. Maybe you’ve always wondered which came first: the colour orange or the fruit*, at any rate, this week’s blog should expand your linguistic colour knowledge, as well as your knowledge about colour etymology.

My favourite etymological origin story is for the word puce, a dark red or purple-brown colour, derived from the French word meaning ‘flea’. This was supposedly coined to refer to the dark red colour left on bedsheets by a squashed flea. Nice. Crimson has a similarly macabre origin – being based on Arabic quirmiz, which is a red dye obtained from the crushed dried bodies of a female scale insect found on the kermes oak. Vermillion (another shade of red) has a related derivation, originally from derived from the Kermes vermilio (a variety of the same insect).

Unsurprisingly, natural dyes have influenced the naming of other colour words. Purple comes from the Latin purpura ‘purple’, which in turn relates to Greek porphura, denoting molluscs that yielded a crimson dye. A particular variety of purple, known as Tyrian purple, is worth a special mention here. It was produced from sea snails by following a laborious process involving removing the snails from their shells, soaking them then removing a tiny gland to extract the dye, which was then exposed to sunlight for a precise period to achieve the desired shade.

The colour sepia is now perhaps most commonly associated with the distinctive shade in early monochrome photographs. Its origins take us back ultimately to the Greek sēpia for ‘cuttlefish’ and a brown pigment secreted by this animal, which was used in drawing and watercolour paintings.

French has been a rich source of vocabulary in English and colour etymology is no exception. So we have russet (reddish brown) from Old French rousset, diminutive of rous for red. Ecru (creamy, off-white) from French écru meaning raw, unbleached. Maroon (a brownish red) comes from marron meaning chestnut, and taupe (grey with a hint of brown) is from the French for a mole. A colour you may not have heard of is gridelin, denoting a greyish violet shade. This too has French origins, being a corruption of French gris-de-lin, ‘grey of flax’.

Finally, for an etymological tale that takes us a bit further afield, we have khaki, a term introduced to English in the 19th century from the Urdu khākī meaning ‘dust-coloured’, from the Persian khâk meaning dust or soil.

*Supposedly the fruit came first, adapted from Spanish naranja. Prior to borrowing this colour term, Old English simply had the word geoluhread (yellow-red).