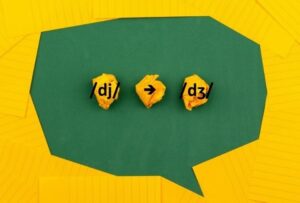 It is not often you get a chance to shoehorn a discussion of phonetics into dinner table conversation, but a recent mishearing presented an opportunity to introduce my family to the phenomenon of “yod coalescence”. The initial prompt was my enthusiastic appraisal of Stephen Spielberg’s debut feature-length film Duel from 1971. A simple description of the plot cannot do justice to the extraordinary tension Spielberg achieves in this pared-back action thriller, in which mild-mannered salesman David Mann is tormented by an oil tanker being steered by an unseen driver. Confusingly, my attempts to describe the film while also eating a mouthful of salad caused the title “Duel” to be misheard as “Jewel” resulting in total bafflement about what role precious stones might have had to play in the proceedings.

The process by which the consonant cluster /dj/ morphs into the sibilant [dʒ] is known as yod-coalescence, and the same phonological shift can occur for the clusters / tj, sj/ and /zj/, which shift to /tʃ, ʃ/ and /ʒ/ respectively. A common example of this phenomenon occurs across word boundaries before unstressed syllables, e.g. ‘would you’ is pronounced /ˈwʊdʒə/.

This is also a well-established historical pronunciation shift, as described by John Wells in his 1997 article Whatever happened to Received Pronunciation? In a word such as nature, the original /tj/ has long since been replaced by /tʃ/ and Wells also notes a shift underway at the time of writing from ‘careful pronunciations’ of /pəˈpetjuəl, ˈgrædjueɪt/ to more everyday forms /pəˈpetʃuəl, ˈgrædʒueɪt/. He describes the former as being more ‘mannered’ or even ‘artificial’, and this perception seems even more likely almost a quarter of a century later.

John Wells also describes the precise phenomenon that caused my Spielberg film title confusion, defining it as a late twentieth century development in which “yod coalescence continues to widen its scope, extending now to stressed syllables.” He gives the examples of Tuesday and tune, where /’tju:/ is rapidly giving way to /’tʃu:/. Wells even wonders whether retention of the non-coalesced form is a “touchstone of RP” at that time, but he subsequently wrote that labelling the coalesced variants ‘non RP’ was incorrect. In Gimson’s Pronunciation of English published in 2008, Alan Cruttenden agrees, stating that yod coalescence in stressed syllables is a well-established RP phenomenon.

Back in the world of film, when David Lynch was invited to make a movie based on Frank Herbert’s science-fiction novel “Dune”, he was initially under the impression that the producers wanted him to make a movie called “June”. Who knows if that might have been a better option in the long run as Lynch’s Dune was a box-office flop. Looking back over his lifetime’s work, Lynch admitted recently “I’m proud of everything except ‘Dune’.”