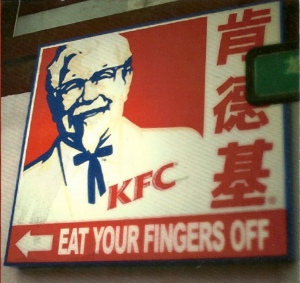 Since advertising experts, working in their own native language, still often struggle in getting the words and message right, how surprising is it that linguists face substantial challenges in translating highly colloquial and emotive advertising documents? Not getting the message quite right is one thing, but there are well-documented cases of things going wrong to the worst extent imaginable.

In general, accurate translation of advertising materials is clearly essential for companies looking to expand their businesses successfully in international markets. On the other hand, in the spirit of “there is no such thing as bad publicity”, a few of the above translation mistakes may actually have worked in the brand’s favour, by creating much more “buzz” for the product than a better translation would have done, and in that sense some terrible translation mistakes in adverts may have worked out in the end, despite the advertisers’ ‘best’ efforts.

It probably still means, however, that the advertising execs leading these projects had to join the queue at their local job centres as a result.