The origins of English sayings: The Rule of Thumb 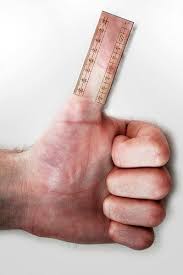 A friend and I recently went on a Jack the Ripper walking tour of London (which I would highly recommend, particularly on a warm day!) and, aside from learning the stories and conspiracies surrounding this notorious murderer, also learned some interesting snippets about English idiom. In this article I wanted to give you a few examples of the origins of English sayings.

The current meaning as defined by the Cambridge dictionary is: practical and approximate way of doing or measuring something e.g. The rule of thumb is that a portion of pasta is two handfuls.

The most likely origin of “the rule of thumb”, though contested by some, is that this saying dates back to the 18th century when a judge declared that a man could beat his wife with a stick so long as it were no wider than his thumb. However, there is no evidence to support that this was legal practice in England. It’s only fairly recently (since the 1970s) that this saying was castigated by feminists for having wife beating connotations. It seems that the phrase actually predates the 18th century judge, and its first use in print appears in the 1600s referring to ‘the rule of thumb’ as a form of measurement.

The current usage of this is to mean that you shouldn’t risk losing something you already have for something that might be better (the grass is greener and all that).  I.e. the bird you have in your hand already is more valuable than the two birds you may or may not be able to catch in the bush. The etymology is related to the sport of falconry, whereby the falcon you had was more of an asset than a bird found in the bush. Versions of the proverb date back to Latin texts from the 13th century, and even a version of the bible in 14th century.

Meaning that spending a little time and effort now to resolve a problem is better than waiting until later when it could worsen and take longer to deal with. It is believed that this saying first appeared as a proverb in 1732, but was probably around in common use long before that. It’s an adage used to chastise laziness or procrastination i.e. if you don’t sew up the small hole in the cloth right now it’ll just become a bigger hole and require many more (or nine!) stitches to fix. You can picture mothers telling their children to mend their clothes before the tear in the material became too big to mend!

I use this one quite frequently, with the meaning that even a bad situation has a positive side to it. Writer John Milton first references silver linings and clouds in his work Comus: A Mask Presented at Ludlow Castle in 1634. Henceforth the silver linings were used in literary creations, although it wasn’t until the Victorian era that the proverb appeared in the form we use it in today.

Has come to mean: you need to continue working and persevering even when you’re very tired or overworked. The literal meaning and past common usage is that the wicked will never rest and will be continually tormented; an ominous threat that awaits sinners in hell. Throughout the centuries it has been used in biblical texts, and dates back to an English copy of the bible printed in 1535.

And on that note I’d better get busy writing the next blog post! Will you use any of the above English idioms today?