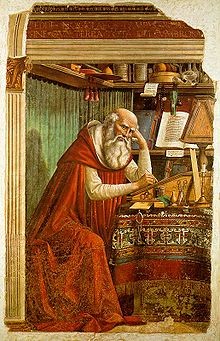 Let me introduce Saint Jerome, the patron saint of translation. Who knew we translators even had one? Not me, that’s for sure. I first stumbled upon Jerome in a casual mention by David Bellos in his book “Is that a fish in your ear? The amazing adventure of translation”. Jerome was born in about 347 in an area of Roman Italy that is now part of Slovenia or Croatia. His official feast day is marked on September 30th, so you still have time to organise a little Jerome-themed celebration this year. He is best known for his Latin translation of the bible referred to as the Vulgate which, during the 16th century, became the Catholic Church’s official version of the bible.

Jerome is thought to have based his translation on the Hebrew bible, which was a radical departure from previous practice where translators had used the Septuagint, a Koine Greek translation of the biblical texts. In fact, modern scholars have cast doubt on the extent of Jerome’s Hebrew knowledge and have suggested that he may instead have primarily used the Greek Hexapla as his source. The Hexapla itself is of interest in translation terms as it consisted of an immense side-by-side edition linking various biblical translations, including the aforementioned Greek Septuagint, with the original Hebrew.

Whatever his source, Jerome’s translation of the bible became the definitive edition for over a thousand years (from around 400 AD to 1530). For most Western Christians it was the only version of the bible they ever encountered. The Vulgate itself served as a source for many subsequent translations of the bible into vernacular languages. For instance, the beautiful 8th century illuminated manuscript the Lindisfarne Gospels are based on the Latin Vulgate but also contain an Old English translation inserted in the 10th century between the lines of Latin. This is the oldest existing translation of the Gospels into the English language.

Beyond being the patron saint of translation, what relevance does Jerome have for modern-day translators? In a letter written to counter the criticisms made of his translations, Jerome describes the balance between translating verbum e verbo (“the word from the word”, or literal translation) and sensum exprimere de sensu (“to express the sense from the sense”, or free translation). David Bellos highlights an additional remark by Jerome on his translation strategy stating that “he abandons ‘sense for sense’ translation specifically ubi et verborum ordo mysterium est, ‘in those places where even the order of the words is a mysterium’.” Bellos points out that there is no final agreement as to the meaning of the word mysterium, and so “at the root of Western arguments about how best to translate lies a mystery-word that nobody is quite sure how to translate.”

I rather like Bellos’ speculation that Jerome may have been explaining his approach to sections of text which he simply didn’t understand. Incomprehension is something translators hate to confess to and yet it is an all too common issue and shouldn’t be seen as a linguistic failing on the part of the translator. Maybe the source text is simply unclear. As Bellos points out, “every utterance ever made in speech or writing has something blank or fuzzy or uncertain about it”. In ordinary life we simply cope with such fuzziness by skipping, filling in from context or guesswork. But skipping is not a luxury granted to the translator. Our one consolation with commercial translations is that there is usually the option of referring back to the client, an avenue which was not open to Saint Jerome.