This blog has delighted in linguistic pedantry before, but the bar has been set to a whole new height by a group in Quito, Ecuador who go out correcting the punctuation and grammar they find in graffiti around the city. Meet the graffiti grammar vigilantes. 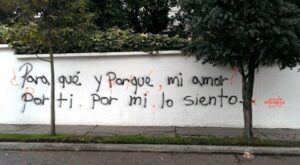 The first reports of corrected graffiti emerged on social media in late 2014, with the Guardian claiming an exclusive interview with the masterminds behind the operation early the following year. Two men established the graffiti correction group Acción Ortográfica Quito (or Quito Orthographic Action) doing what they describe as “orthographic vandalism”. Their identities are concealed, for good reason, as they set out at night with spray cans and an eagle eye for missing accents, commas and other punctuation marks.

One of the founders of the group of graffiti grammar vigilantes goes by the appropriate pseudonym “Diéresis” (a diacritic that is similar to the umlaut) and in his day job he works as a lawyer. Perhaps unsurprisingly for a profession that relies on an eye for detail and an obsession with accuracy, he just could not stand idly by when he started spotting appallingly ungrammatical graffiti. “Grammatical errors cause stress”, he explains. If linguists had heroes in capes, Diéresis would undoubtedly qualify.

Frustration at poorly punctuated signage also drove a Bristol man to become a self-styled “grammar vigilante”. In 2017, the BBC tracked down the “Banksy of punctuation”, who by that point had been setting out at night to correct signs on Bristol’s shop fronts for over a decade. His speciality is the rogue apostrophe, known for good reason as the grocer’s apostrophe due it its proliferation on shop signs. The man has even invented a bit of equipment he calls his “apostrophiser”, which features a long handle to facilitate reaching high signs to add or remove the relevant punctuation marks. When asked about the legality of his enterprise, he admitted it was not strictly withing the bounds of the law. In a defence that will be music to the ears of every linguistic pedant, he claimed “It’s more of a crime to have the apostrophes wrong in the first place.”

All of which is reminiscent of the classic scene in Monty Python’s Life of Brian, where the hapless Brian, played by Graham Chapman, is daubing the anti-Roman slogan “Romans go home” in Latin to earn kudos within the revolutionary group “The People’s Front of Judea”. He is apprehended by a Roman centurion, played by John Cleese, who is so distracted by the atrocious grammar he fails to notice the content of the message. Instead, he berates Brian to “conjugate the verb go” then lectures him on the need for an imperative verb and accusative case, before ordering him to write out the correct version 100 times on the wall or “I’ll cut your balls off”. The graffiti artists of Quito would be trembling in their boots.