A discussion of the specialised terminology and catchphrases used in different professions prompted my writer/director brother to give me a rundown of some of the jargon used in the film industry. I’ve picked my favourites to include here and am now trying to find ways to re-engineer some of these for use in the less exotic world of translation and proofreading. 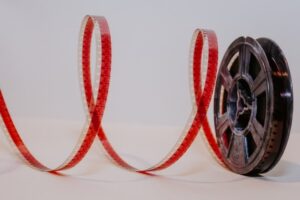 Hang a lantern on it
This phrase is used to refer to a plot device where something implausible happens but, instead of glossing over it, the writer deliberately draws attention to it in a conscious effort to tell the audience to suspend belief and not ask too many questions. As screenwriter Melinda Snodgrass puts it, “By acknowledging that we are aware of the problem/issue we reassure the audience that we know what we’re doing and they can sit back, relax and take the ride with us.”

A hat on a hat
This is the film industry equivalent of over-egging the pudding. Comedy writers use the phrase to refer to two iterations of a joke, where the second is unnecessarily repetitive or even a distraction. It often describes a gag that was previously working successfully and is undermined by the embellishment. The Mighty Boosh comedy TV show featured one episode with a character called Johnny Two Hats (wearing the predictable headgear) who subsequently turns up wearing four hats in possibly the ultimate insider joke about “putting a hat on a hat”.

Jumping the shark
This term is used to refer to the scripting of a wildly unlikely event, usually in a bid to reverse the fortunes of a programme with declining audience appeal. The phrase is credited to Jon Hein, who is said to have coined it in 1985 in reference to a 1977 episode of the hit sitcom Happy Days, in which the character Fonzie goes water-skiing and jumps over a shark. Hein created a website on which he posted his assessment of popular television shows and the moment each one “jumped the shark”. Perhaps even more delightfully, Wikipedia suggests the phrasal antonym to jumping the shark is “growing the beard” supposedly in reference to the dramatic improvement in quality in Star Trek season two, and in honour of the beard grown between the two series by the Star Ship Enterprise’s first officer William Riker.

And finally, the MacGuffin
A device that is instrumental to plot development but insignificant in itself. This term originates outside film but was popularised by Alfred Hitchcock with reference to the military secrets that motivate the protagonists in The 39 Steps. The nature of the secrets is never revealed; instead, the audience is expected to assume their importance and enjoy the ensuing adventure. Similarly, in the Big Lebowski, Jeff Bridges’ character The Dude embarks on a convoluted quest triggered by a case of mistaken identity when someone pees on his rug. Arguably here the Coen brothers have devised a MacGuffin and then proceeded to hang a lantern on it.