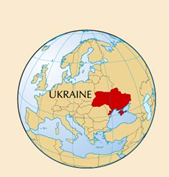 Ukraine is currently in the news for all the wrong reasons. Less controversially it has been hanging out in my folder of “unwritten” blog post ideas ever since I stumbled across this 2014 Time magazine article about use of the definite article “the” in the country’s name. The journalist recounts how Barack Obama caused something of a stir by referring to “the situation in the Ukraine”. As William Taylor, former US ambassador to Ukraine, explains “The Ukraine is the way the Russians referred to that part of the country during Soviet times … now that it is a country, a nation, and a recognized state, it is just Ukraine. And it is incorrect to refer to the Ukraine, even though a lot of people do it.”

Even in 2014, the dropping of the definite article was not a new development. An article in The Ukrainian Weekly from December 1991 entitled “The ‘the’ is gone” describes the relevant shift in usage being introduced to the Associated Press style guide. All of which suggests that updating style guides is one thing but changing language use is something else entirely. An official from the Ukrainian National Association’s Washington office is cited as explaining Ukrainian Americans’ preference for dropping the definite article as follows “The article is used for regions like ‘the Appalachians’ or ‘the Crimea’”. With Ukraine declaring independence in the summer of 1991 the implication was clearly that the definite article had to go.

At first, I wondered if there was a more broadly recognised process whereby a former region of a country acquires independence and becomes a country in its own right, thus ditching its definite article. But the reality is more complex, and in all honesty slightly random. Definite articles make logical sense for countries like the United States of America and the United Kingdom, given that they consist of obvious nouns with accompanying adjectives. Similarly you would naturally refer to the Maldives or the Bahamas because of the implied noun: these are groups of islands, and the name reflects their plural status. Having said that, the official name for the Maldives lacks the definite article and is simply Maldives. By contrast, the Bahamas are officially The Bahamas. As suggested earlier, nobody seems to have applied any logic to this process, although arguably The Bahamas is derived from the country’s full name the Commonwealth of The Bahamas.

Anatoly Liberman, a professor at the University of Minnesota, suspects that people are tempted to add the article if the place name refers to a geographical feature like a group of islands (as above), a river (Congo), a desert (Sudan) or a mountain range (Lebanon). A similar logic can be applied to the Netherlands, which means ‘the low countries’. Historically, Argentina was referred to as ‘the Argentine’ in English, a habit potentially adopted either from the Spanish custom of using the definite article La Argentina or acknowledging the country’s official title, the Argentine Republic. But all these explanations seem like a post-hoc rationalisation of something that evades rhyme or reason. One thing is for sure, get it wrong at your peril because the definite article attracts very definite opinions!