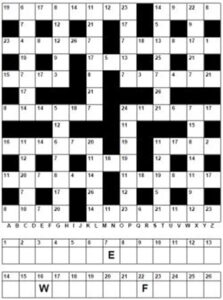 A codeword puzzle is a crossword grid in which each letter of the alphabet has been substituted by a number from 1-26. Usually, you are given 2-3 letters to help you on your way. For example, the codeword puzzle might reveal that ‘S’ is represented by number 10, and ‘O’ by number 23. The challenge is to fill out all the words in the grid and map each letter in the alphabet to the correct number. This is a soothing task for the linguistically minded, which avoids the embarrassment of having insufficient general knowledge to complete conventional crosswords or the need to develop the warped mindset of the cryptic crossword solver.

The strategy I use is simple – first you fill out any squares containing the starter letters, next see if you can guess any whole words, work out some possible letter options from your word guesses and continue sketching out word guesses to create additional letter-number options. Sometimes you find you are stuck, with letter options producing a string that cannot be mapped to an English word, in which case you will need to unravel your assumptions and try again. At some point, your guesses take you to a tipping point, where you have enough compatible conjectured words to be confident that you have guessed correctly, and you can complete the grid.

So, I was interested when my dad suggested an alternative approach – he asked whether I began by looking for the most frequently occurring letters, for example, using the knowledge that ‘e’ is the most common letter in English to help decipher the puzzle. This had never occurred to me, although clearly understanding letter distribution underpins the word-guessing approach. I was interested to find The Puzzler confirming my instinct that “undertaking an analysis of letter frequency is not very useful as an approach to solving these puzzles.” One reason for this is that any ranking of the most common letters is highly context dependent. The often-cited order e, t, a, o, i, n, s, h, r, d, l, u might be valid for the most commonly occurring words in written and spoken English, but puzzles are not necessarily representative of such trends. Puzzle-setters are also acutely aware of letter frequency strategies and are fond of thwarting such logic by including lots of uncommon letters or restricting the inclusion of some of the more common letters.

A more useful approach involves understanding common letter combinations in English, such as which letters can form double-letter groups and an awareness of recurrent word endings. This can sometimes be combined with frequency analysis, for example ‘q’ is always followed by ‘u’ and is a relatively uncommon letter. So, if a number only appears a couple of times on the grid, always followed by the same number, that might add weight to a ‘q’ + ’u’ hypothesis. Similarly, words ending ‘-ing’ can be a useful key to unlock the grid. Long words are another weak point in the code because the number of possible letter combinations is more limited than in shorter words.

Despite using letters rather than numbers, the codeword seems to me to be closer to the sudoku than it is to a crossword. The solution is found through pattern matching rather than linguistic clue solving and the process is somewhat repetitive and soothing. Whatever your puzzle preferences, Stephen Sondheim summed it up well saying, “The nice thing about doing a crossword puzzle is, you know there is a solution.”