As a former student of German at Cambridge University, the Times headline “Cambridge seizes Zeitgeist with gender-neutral German” immediately caught my eye. Despite the bold claim in the introductory paragraph that the university is saying “Auf Wiedersehen to… Read More 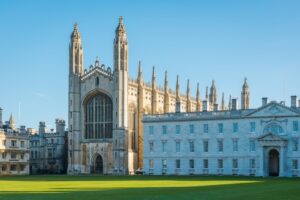 As a former student of German at Cambridge University, the Times headline “Cambridge seizes Zeitgeist with gender-neutral German” immediately caught my eye. Despite the bold claim in the introductory paragraph that the university is saying “Auf Wiedersehen to teaching gendered German”, the reality is somewhat more mundane. Contrary to wild protestations on Twitter, there is no suggestion of eliminating grammatical gender from German teaching. All that is being proposed is that students explore the different options for encoding a person’s “natural gender” — in other words, their sex — in job titles and other nouns. Admittedly, contemporary sensitivities about cross-sex identities have heightened tensions around this issue. And the novel adoption of non-binary identities by large numbers of young people has thrown an additional spanner into the very binary works of German’s “natural gender” noun system (there is no equivalent of neuter for these personal nouns). But there is nothing new about the debate itself; arguments over the encoding of sex in German go back many decades.

German, like many other languages, has tens of thousands of sex-specific everyday words such as Lehrer/Lehrerin, Rechtsanwalt/Rechtsanwaltin, Politiker/Politikerin (male/female teacher, lawyer, politician) etc. Unlike in English, there is no gender-neutral option for these words. The correct version depends on the individual being referred to. When referring to several people, German exhibits a familiar patriarchal strategy of using the male form as the default. This is something that has been annoying feminists since at least the 1960s and resulted in moves to create more inclusive collective plurals (e.g. Lehrende or Lehrkräfte for teachers) or the use of both male and female forms (Lehrerinnen und Lehrer).

It took until 1995 for Duden (the preeminent German dictionary) to acknowledge somewhat begrudgingly “Bemühungen, eine sprachliche Gleichbehandlung von Frauen zu erreichen” (efforts to achieve equal treatment of women in the language). Even now, many Germans are dissatisfied with the inelegance of the suggested alternatives. Particularly fraught are the various typographic methods used to merge the male and female plural forms by inserting an asterisk, colon or underscore, Lehrer:innen/ Lehrer*innen/ Lehrer_innen, or by starting the female ending with a capital letter LehrerInnen. Not only are these widely regarded as rather ugly, but also there is little agreement about how they should be pronounced.

In frustration at the cumbersome nature of the gender-neutral options, in 2013 the University of Leipzig took the radical decision of adopting the female form as the default instead. Needless to say, that just caused a whole new group of people to get annoyed!

A more interesting question perhaps is why it is that quite so many languages mark an individual’s (natural) gender in this way. In the past, language users presumably chose to signal this information because they deemed the sex of the person they were talking about relevant in some way to their message. Perhaps future language users will consider this a very odd quirk and sufficiently irrelevant as to abandon the system entirely. Or perhaps languages will evolve to encode the plethora of novel gender identities in even more complex ways. Whatever happens, people are sure to have firm opinions about it!