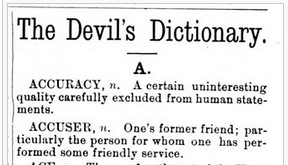 Ambrose Bierce (1842 – ca 1914) was an American author and journalist, best known to language lovers as the creator of the Devil’s Dictionary, first published in 1911. The dictionary is a collection of irreverent and amusing definitions, which began life in Bierce’s various contributions to magazines and newspapers in the late 19th century. His tongue-in-cheek approach to lexicography was swiftly mimicked by others seeking to compile their own alternative dictionaries, prompting Bierce to make the barbed comment in his introduction that “some of the enterprising humorists of the country had helped themselves to such parts of the work as served their needs.”

Thanks to the volunteers at Standard Ebooks, you can browse the entire dictionary online or download an ereader version. As literary critic H. L. Mencken put it “in The Devil’s Dictionary are some of the most devastating epigrams ever written.” These range from the pithy: Twice, (adv.) “Once too often” and Positive (adj.) “Mistaken at the top of one’s voice” to more in-depth, searing diatribes from Bierce, such as his definition of Regalia (n.) which runs to many lines: “Distinguishing insignia, jewels and costume of […] Visionaries of Detectable Bosh […] the League of Holy Humbug […] Plumed Increscencies of the Magic Temple […] Impenitent Order of Wife-Beaters”. This style of dark humour is a recurrent theme, as seen in his definition of Orphan (n) “A living person whom death has deprived of the power of filial ingratitude”.

Bierce holds an impudent disdain for other professions, with Historian defined as “A broad-gauge gossip”, Lecturer as “One with his hand in your pocket, his tongue in your ear and his faith in your patience”, and a Lawyer is simply “One skilled in circumvention of the law” (to be cross-referenced with the definition of Liar as “A lawyer with a roving commission”).

Bierce is equally merciless for those within his own world of writing and publishing. The Proofreader gets the delicious entry “A malefactor who atones for making your writing nonsense by permitting the compositor to make it unintelligible.” Meanwhile, the Editor gets an extended definition in which Bierce no doubt wreaks vengeance on some of his own editorial adversaries: “Prankily, crankily prating of naught, Silly old quilly old Monarch of Thought.” He hasn’t forgotten his potential literary reviewers either, defining a Critic (n.) as “A person who boasts himself hard to please because nobody tries to please him.” When American novelist and literary critic William Dean Howells said, “Mr. Bierce is among our three greatest writers.”, Bierce is said to have quipped, “I am sure Mr. Howells is the other two.”

But Bierce is not averse to turning his sardonic attentions on himself. Thus we have Egotist (n) “A person of low taste, more interested in himself than in me.” And his roguish self-awareness is all too clear in his definition of the Dictionary itself as “A malevolent literary device for cramping the growth of a language and making it hard and inelastic. This dictionary, however, is a most useful work.”