This week’s blog explores pseudo-anglicisms, words that take lexical elements from English to create a neologism that is unknown in English or used with a different meaning. These could be described as a special subcategory of false friends. They appear to be English, but their meaning may not be at all obvious. As a German translator, I come across the phenomenon of “Scheinanglizismus” on a regular basis because Germans seem to be particularly fond of this form of linguistic creativity. This is probably in part because English is so widely understood in German speaking countries, but the phenomenon is found in plenty of other languages too. 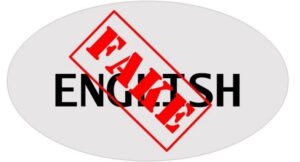 Pseudo-anglicisms can be a thorny issue for the translator. Poor translations sometimes simply insert the word unchanged, even if an English reader would struggle to make sense of the term. Not so long ago, I reviewed a translation that used the German pseudo-anglicism old timer, which refers to a vintage or classic car, unlike English, which uses the same term for an old person. Similarly I have seen English texts referring to Best Agers, often used in marketing to describe a consumer group aged 40+ or even 50+. While this term is well-understood by German speakers, it hasn’t yet achieved widespread use in English, although this may be a case where the failure to translate the term into a sensible English alternative may ultimately end up influencing English itself.

In other instances, you may find a client is baffled as to why a translator has rejected a “perfectly good English word” in favour of a different choice. Note to translation clients – trust the translator, if they tell you an English word isn’t used that way in English, they are probably right. Read on for plenty of examples.

The world of fashion offers a couple of fine pseudo-anglicisms with pullunder, which is a play on pullover, but in fact refers to a tanktop. Then there is the magnificent Dressman, referring to a male model, which I would love to introduce into mainstream English. Germans are sometimes puzzled to discover that their word for mobile phone, Handy, is not in fact a term used in the English-speaking world.

Other pseudo-anglicisms are more guessable in context. It’s not difficult to work out what a Fitnesscenter is, even if most Brits would be more likely to refer to it as a gym. Then there is the currently ubiquitous “home office” to describe an area for remote working from a person’s home. However, British English speakers generally avoid this formulation as it is the name of a government ministerial department. German also shares the pseudo-anglicism Smoking with lots of other European languages when referring to a smart black evening jacket.

The influence of English extends beyond Europe. Japanese has a similar phenomenon known as wasei-eigo, “Japanese-made English”, not to be confused with gairaigo, which are simply loanwords transliterated into Japanese. My favourite example is the magnificent yūtān rasshu, from the English words U-turn and rush, used to refer to the mass travel and associated traffic jams that occur at the end of major national holidays, such as New Year! Another fine example is sararīman, from the English salary + man, which captures what is perhaps a uniquely Japanese concept, referring to a (male) office employee at a respected company, who is characterised by his loyalty, willingness to work overtime and dedication to his employer.