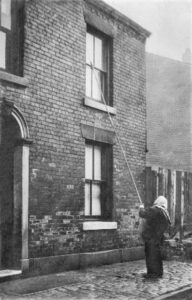 During a bleary-eyed start to the day recently, discussion at the breakfast table turned to the pros and cons of different alarm clock devices and the tricks people deploy to ensure they get out of bed rather than remaining under the duvet. This led us on to the now lost profession of the knocker-upper, who were deployed in the days when alarm clocks were either prohibitively expensive or insufficiently reliable. The knocker-upper’s job was to rouse slumbering people to make sure they got to work on time. The preferred technique was to carry a baton to rap on the door, or a long pole to tap on the bedroom window. Some would even refuse to move on from a particular house until they had seen evidence that the inhabitant had extracted themselves from bed!

But what really caught my attention was the job title, which is a splendid example of nominalisation, i.e. the process of creating a noun from a verb or adjective. The phrasal verb knock up, meaning to wake someone by knocking on their door or window (and not crucially its other informal meaning, which is to make a woman pregnant) is converted into a noun to describe the person performing this activity.

Knocker-uppers were most common in northern British industrial towns, where people worked shifts and needed rousing at various times of day. In County Durham, miners would write their desired wake-up time on a slate board — known as a knocky-up board — outside their house and a knocker-upper employed by the colliery would be dispatched to wake them at the appointed hour. The chicken and egg style conundrum of who woke the knocker-uppers is celebrated in a local rhyme, as recorded by the Lancashire Mining Museum:

In another fine example of nominalisation, Wikipedia claims that a knocker-upper frequently carried a ‘snuffer-outer’, a long implement used to extinguish the gas lamps as dawn broke, which could serve the dual purpose of being used to rap on bedroom windows. This delightful linguistic claim is flagged with the ominous note ‘citation needed’, but I don’t think we should let that stop us rejoicing in the linguist invention or indeed pledging to deploy a similar strategy for contemporary professions. A previous blog celebrated inventive job titles, including the lovely nominalisation child wrangler, for the person on a film set with responsibility for the child actors. Translators could certainly be described as word wranglers but surely some creative linguistic spark can come up with an even better title.