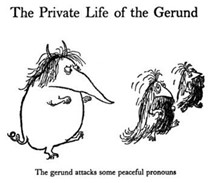 Like most kids, my three offspring regard parental advice with a hefty dose of suspicion, including when it comes to book recommendations. So, one of my proudest parenting successes was listening to the gales of laughter from my youngest child’s bedroom after I had cajoled him into reading my ancient copy of The Compleet Molesworth, written by Geoffrey Willans and illustrated by Ronald Searle (originally published 1958). The eponymous hero, Nigel Molesworth, recounts his life at an English private school in the 1950s and one of his most delightful skills is transforming standard English spelling into a feast of phonetic hilarity.

Certain Molesworthian phrases have entered common parlance and retain their charm, even though the world he inhabited has long since vanished. Such is my obsession with Molesworth, as soon as I started typing “as any” into Google, the all-knowing search engine immediately offered me the complete phrase “as any fule kno”. This classic Molesworth appraisal even has its own Wikipedia entry and has often been cited in the British press.

Molesworth’s wayward spelling, slapdash grammar and comedic interjections are interspersed with unexpectedly formal and correct phrasing to create a unique writing style.  He uses these contrasts to great effect, starting a sentence with “you hav various swots, bulies, …” then offering the correct pronoun declension and orthodox word order “with whom i am forced to mingle”, before finishing off with a trademark “hem-hem” for a distinctive Nigel Molesworth pronouncement.

The text is peppered with asides, often incongruously introduced with an “n.b” or “e.g.” as in the opening line of Down with Skool, which begins “This is me e.g. nigel molesworth the curse of st custard’s”. He often deploys parentheses to deliver his own verdict on events. In the headmaster’s speech at the start of term, when the “sour-faced boys xsembl in school hall”, Molesworth uses brackets to track the “hearty larff” from the headmaster attempting to rouse his reluctant audience, escalating to “fits of larffter” followed by Nigel’s ultimate parenthetical verdict “he is going to die it is not good for him to larff so much”.

Other distinctive stylistic features include asterisked footnotes and numbered side notes. These are used on the headmaster’s speech to provide a “crib” to the headmaster’s “reel thorts”. The warm welcome offered to students is undercut with the side note “so they are back agane the little beasts”. And a darker subplot is hinted at when the headmaster’s announcement “I would like to introduce a new master who hav joined us in place of mr Blenkinsop who left suddenly” is footnoted with the reflection “who would hav thort it he semed so nice”.

Nigel is unconvinced of the value of any lessons but is quick to dispense advice such as “n.b. a good roare of larffter will cut the lesson by two minits six seconds”. French lessons feature Armand, who Molesworth decides “Papa is only taking […] to Dieppe in order to drown him”. Meanwhile, English masters are “trying to read your inmost thorts heaven help them”. Molesworth’s aversion to Latin has been covered previously in this blog, and linguists will delight in his tactic of asking the schoolmaster a fiendishly tricky grammar question to distract from the lesson “e.g. gerunds … are always tricky and shifty”. I think we can all agree he is correct on that one.